One sunny afternoon last month, an artist who describes himself as an “architect for the contemporary bird” appeared before an empty storefront in SoHo, climbed a telescoping ladder and took measurements for what would be his next finch-size masterwork.

At first, XAM designed standardized units and placed them wherever he saw a good, lofty street sign, heading out around 5:30 a.m., when there were few pedestrians or authorities. More Photos »

He had arrived, casually, a few minutes earlier, wearing dark coveralls and wheeling a dolly that held the ladder and other supplies. Then he put on a white hard hat, a tool belt and a reflective orange safety vest. “Usually, I walk around in costume,” he said, referring to his strategy of dressing as a city worker so as not to be stopped while doing something that is technically illegal. “But I can’t handle the heat too well.”

The pigeons didn’t notice him. Neither did the police. 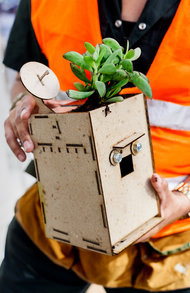 XAM is the name he uses to preserve his anonymity (he agreed to be interviewed only on the condition that we use it, too). He has been hanging street art for three years now in the form of birdhouses. Although the term seems inadequate, these structures are, in fact, functioning shelters for birds. But many also have jigsaw angles and purple-camouflage paint schemes, and features like passive ventilation systems, green roofs, gravity-controlled feeders and solar-powered LED porch lights that attract insects.

In a comment on the mortgage crisis, some have “Bank Owned” or “Foreclosure” signs plastered across the entry holes. And many are equipped with (nonworking) rooftop satellite dishes.

The Urban Habitat project, as XAM calls his work, was part of the New Museum’s Idea City Festival in May, and his birdhouses were also shown at Dorian Grey Gallery in the East Village. But new installations continue to pop up all the time in cities like New York, Los Angeles and Mexico City.

Christopher Pusey, an owner of the gallery, said it is the mix of form and function that sets the birdhouses apart from most ephemeral street art he encounters. “I was blown away by the precision” of the construction, Mr. Pusey said. “They’re clever in a very creative way.” 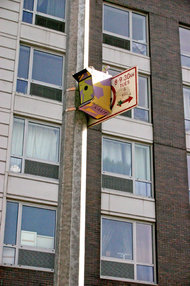 Still, the birdhouses aren’t intended to hang in a white-walled room but in the street, where XAM has installed more than 100 since 2010, from Bushwick, Brooklyn, to Boyle Heights in Los Angeles. Of course, in neighborhoods where residents are attuned to street art, urban birds, as intrepid as they are, rarely stand a chance.

“In Los Angeles, I have this favorite area near downtown that’s very industrial,” XAM said. “I’ve gone back multiple times and I still see my units up. If I put one up in Williamsburg, it may be gone tomorrow.”

XAM, who is 30 and lives with his wife in Bedford-Stuyvesant, has an unusual background for a Brooklyn street artist. He grew up in Santa Barbara, Calif., and studied architecture and design at the School of the Art Institute of Chicago. Now, he said, he makes a living doing odd jobs: part-time building maintenance, freelance graphic design, working as a lighting technician at events. 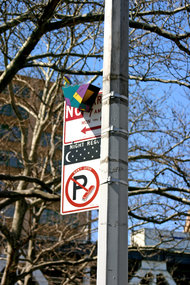 It was his interest in taking things apart to see how they work that led him to create an alter-ego, a robot called XAM. (The name is all capital letters, he said, so that it reads like an acronym, although the letters don’t actually stand for anything.) XAM the robot likes to demolish contemporary architecture, his version of taking things apart, but he atones for it by making birdhouses. The robot’s body appears in an abstract form in the purple blocks of color on many of the birdhouses.

At first, XAM designed standardized units and placed them wherever he saw a good lofty street sign, heading out around 5:30 a.m., when there were few pedestrians or authorities to notice a guy with dreadlocks shimmying up a pole.

Lately, he has been using old L-brackets or other architectural details on building exteriors as ad-hoc hooks and designing site-specific birdhouses. The construction-worker outfit allows him to perform covert research, and adds a bit of theater.

At the building in SoHo, a thin beam jutted out appealingly under the fire escape, and a “For Rent” sign seemed to promise a hassle-free installation. After taking measurements, XAM will design the birdhouse at home with a computer program, before taking the blueprints to a friend who owns a laser cutter.

“This piece may take me 10 hours to make,” he said, packing up his ladder and gear. “They’re pretty labor-intensive.”

A few days later, he was back in SoHo, wearing his hard hat and orange vest. This time, he was carrying a new birdhouse in his backpack. It featured by-now-standard luxuries of eco-friendly modern bird living, like a green roof and a solar-powered porch light, but was unpainted and shell-like. Like any engaged architect, XAM has been experimenting with new materials, in his case cellulose board and a low-VOC sealant, and he wanted to test the sealant before painting the house.

“I wouldn’t have considered myself a birder before this, but I am turning into a birder,” he said.

He fiddled with the solar-driven light. “If it has a full charge, it will shine for eight hours and attract insects,” he said. “The purple martin has to eat half its body weight in insects a day.”

The installation took all of five minutes. No one on the street paid much attention, except for a guy who rushed over excitedly thinking XAM was the same street artist who had painted graffiti on the building’s facade.

He looked at XAM in his construction get-up, and then up at the little structure. One feared the birds would not be long for this house.

This article has been revised to reflect the following correction:

What you can read next